Donald Trump is not stupid.

That might come as a shock to many people and quite frankly it comes as a shock to me too. Especially given the endless stream of nonsense that emanates from that orange blob. It is true though, he is not stupid. Even after he came out today, in the wake of yet another mass shooting, to determine that guns are in no way relevant after a man killed 26* men, women and children… with a gun. But the gun wasn’t relevant so we don’t need to talk about it. By the way, 26 dead makes it the deadliest shooting in Texan history, which comes only weeks after the deadliest shooting in US history. That wasn’t the time to talk about guns either, apparently. If you are keeping score though that brings the mass shooting tally to 307 mass shootings in 309 days.

In fact, it is never time to talk about guns in the USA, and why should we talk about them? They have no part to play in these shootings, remember? The real issue, as pointed out again by Trump today is; Mental Illness.

All those pesky mentally ill people just love shooting people. They have their illness, their selfish illness, and they think, you know what I will do today? I am going to go out, legally buy semi-automatic guns and shoot loads of people – because that is what mentally ill people do. We are a dangerous breed you see. I know you probably haven’t realised it but we are. We are dangerous.

The vast majority (>95%) of all violent crimes are committed by people with no mental illnesses at all. A study in the US analysed 120,000 gun crimes, which should speak volumes for itself, and found that only 5% of perpetrators were diagnosed mentally ill. And even with that, it was not possible to determine whether mental illness caused them to shoot other people or not. In fact, almost 50% of all violent crimes, including gun crime, is committed by people under the influence of alcohol and/or drugs. Other consumables to be wary of are our food and oxygen, as consuming these things have a much stronger correlation with mass shootings than mental illness. So maybe we should blame those things instead? Oh yeah, that would be stupid.

I say ‘we’ in the previous paragraph because I’m from the western world. Strangely though, out of all the western countries (who also happen to have very similar rates of mental illness), it is only America that has an issue with gun crime and mass shootings. So much so that their gun issue is over 25 times larger than any other high-income country. I’m sure it is just a coincidence that America has the highest gun ownership rate of any country on the planet. Oh, and I should point out that I have done the research for you, crunched some numbers and discovered that 100%, yes one hundred percent, of all mass shootings were carried out with a gun. I didn’t listen a lot in my statistics class but I think that is a strong correlation.

So what do the people in power want to do about this (non-gun) issue?

Well, not a lot, is the short answer. You see, by deflecting the attention to mentally ill people with absolutely no basis or evidence whatsoever, the politicians can prevent any form of gun control. Why would they do that I hear you ask? Well, it has absolutely nothing to do with the fact the NRA and the Gun Lobby  donate millions of dollars to political parties every year. All of these politicians then independently come to the same conclusion and decide completely off their own back that gun crime is not caused by guns. Just to clarify that point further, their opinion is not influenced in any way by the millions of dollars they receive – so let’s get that straight right now. Don’t be so unpatriotic by using your brain now.

The cause of mass shootings is not guns, OK? It is mentally ill people, so obviously just like in the case for terror prevention, these politicians are doing everything in their power to ensure their population is safe from mentally ill people. What they have done is invest huge sums of money into mental health care treatment and ensured their population has access to the best mental health care seen in any country anywhere in the world. Ah yeah, that is not true either. That is because Trump is doing his best to ensure millions of poor people, and trust me, there are many millions of poor people in the US, lose their access to health care. If his plan succeeds It will actually push the total amount of uninsured United State of Americans up to over 50 million, or more than the population of England, Scotland and Wales put together. In addition to that, even 1 million or so people who do manage to keep their insurance will lose their right to mental health care.

So Trump doesn’t want to talk about guns and he seemingly doesn’t believe his own  rhetoric about mental health being the cause. And, we have already established the fact that he and his party will lose money if he brings in gun control or invests in mental healthcare* (which is in no way connected to his inaction). So the next question you will ask is, how did I come to the conclusion that Donald Trump is not stupid?

It is a valid point and it all comes down to one man: Carlo M. Cipolla. He is a little known Italian economist who wrote extensively about stupidity, he even made a graph and everything – what a nice guy. He also defined the 5 fundamental laws of stupidity, shown below:

You read through that list and saw that a lot of them relate to Donald Trump and you quickly mischaracterised him as stupid. That is because of point number 3 – ‘himself deriving no gain’. Cipolla does not define anyone who has personal gain from a situation to be stupid. If they were so stupid how would they gain something? Cipolla created a whole new name for people who gain from other peoples losses and this is where his graph becomes important. 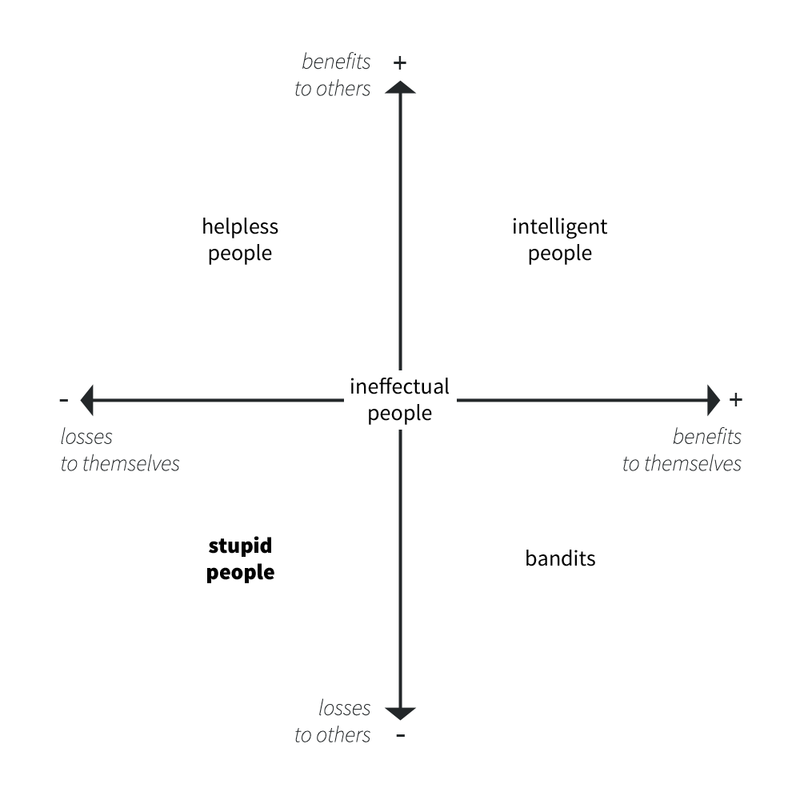 As you can see in the graph, the Republican Party and Donald Trump do not fall into the ‘stupid people’ category – they gain too much. They act in a way which is extremely detrimental to others whilst benefitting themselves, whether that be through not paying for health care, telling a dead soldier’s Mum her son knew what he signed up for, taking money from gun lobbies, cutting taxes for themselves/the rich and manipulating elections.

And it is for that reason, Donald Trump and the Republican Party are bandits, not stupid. The people who voted for him, however, are the most stupid people on Earth, not only do they see losses to themselves but they also see significant losses to other people. To show that more simply I edited the graph to help the Trump voters understand.

One of the key takeaway points from Cipolla is that we constantly underestimate the power of stupid people. In his work, he goes on to say that stupid people are more powerful than any organisation we have ever seen, and this is not limited to the US, we have already seen the UK vote for something which provides losses to themselves and others, and other countries are following suit. The issue, of course, is bandits, but stupid people should not be underestimated. Fascism and the far right aren’t on the rise, it is stupidity that is to blame, and the only way to combat that is through education. Rather coincidentally the two countries mentioned above have the 2 most expensive higher education systems in the world – value for money I think not.

So, Trump is a bandit and most people are stupid, on the bright side though mentally ill people are not inherently violent, and in fact, we are significantly less violent than people without mental illnesses – BAN ALL NON-MENTALLY ILL PEOPLE. Ah no, that would be stupid, see how easy it is?

*At the time of writing.

*All of those figures are genuine, including the being hit by an Asteroid one.

*Investing in healthcare actually generates money in the long term as you have a fit and healthy populous that can work and create. Unfortunately, capitalism is a very short-sighted system so health care becomes an investment masquerading as a cost. Plus the 4-year, 2 run maximum presidential cycle means if, as a president, you do invest in health care the benefits won’t be realised for about 4 terms and someone else will take the credit and what kind of egomaniac would allow that to happen?